Sailing in the Baltic at last

Locking into the kiel Canal

And so into the Baltic……

The Kiel Canal was uneventful apart from a bit of an incident in the lock at the Elbe end when, mysteriously, the engine refused to turn over and re-start when the gates opened. Absolute panic reigned, but fortunately, I managed to get it to start after a minute or so, which was just as well as we were sharing the lock with a small ship which wanted us out of the way so it could get moving !

The AIS proved very useful in the canal for spotting ships coming up ahead and behind before we could see them round the bends. It was fairly unnerving being so close to them in the restricted waterway, but we got used to it after a while. The strangest contact was a very large dumb barge with a tug at either end – one pulling and one pushing/braking it. This barge was so wide they suspended 2 way traffic on the canal in the sections it was going through, and the other ships had to wait at passing places for it to go through.

We stopped overnight in torrential rain and thunder at a small yacht yard in Rendsburg just off the main Canal. This wasn’t our intended berth which was closer to the town centre, but as we were approaching the area the heavens opened and we were drenched in seconds so headed for the first mooring possible!  We were surprised at how pretty parts of the canal are, not what we expected at all, it was very green and swarming with a great variety of wildlife including several large flocks of swans, something  we had never seen before.  Next day, the Baltic !

After locking out of the Kiel Canal the following day, we nipped round the corner into Kiel Forde in the hope of getting a mooring near the Town centre. We tried our luck at Dusternbrook Marina, but the only available mooring on a busy Sunday afternoon in August would have required a magician to get the boat into it. So we declined with thanks, and went to the British Kiel YC instead, where we were made very welcome. All British sailing books about the Baltic go on about this place, but it really is like a little piece of home here in Germany. It is a British Forces adventurous training centre, and a relic of the immediate post-war years. There is even a bath for the ladies in the washrooms.  During our stay, a big Combined Services yacht was taking on crew for a passage to Gosport. I imagine they covered the distance a bit quicker than us!

That night we opened a bottle of Champagne to celebrate our arrival in the Baltic.

It was here that we met Horst and Janet, with their incredibly well behaved rescue dog Polly on their boat Tutanui, and discovered that we had some mutual sailing friends back in the UK. (Small world). Janet is also the CA Honorary Representative for the Kiel area.

The weather was becoming unsettled again, and whilst we were in Kiel it blew quite hard. But after 3 days we were able to leave in company with Horst and Janet, and head for Fehmarnsund.  It was just as well we were with them: There is a large firing range between Kiel and Fehmarn, some of which you can cut across even if the range is live, which it was, with the right local knowledge and communication with the guard boat.  This saved us a long detour.

We had a great night in the Sailing Club Marina at Hieliganhaffen where we were allowed to light a BBQ beside the clubhouse. The following day we had the best sail of the trip so far, to Orth, which is a pretty little port on Fehmarn Island. Unfortunately, a lot of other people had the same idea, and finding no spare moorings we diverted to Burgstaaken. 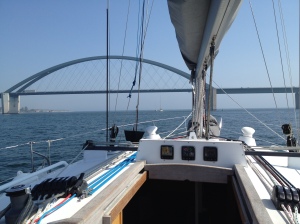 This is the place where we will eventually lay Grey Wanderer up for the winter.
The weather continued to be windy a lot of the time, several other sailors, both Brit and local told us that the weather this summer has been the worst for a long time. There is a whole community of Brit boats around here at this time of year, all preparing to lay their boats up at the end of the season. Arriving here a few weeks early gave us a chance to talk to some of these people and get some great tips. We were also instantly included into several social events. Which was really nice, especially as we were starting to feel a little homesick by this point.

The following week friends from the UK came to visit, so we did a mini-cruise around some of the ports in Fehmarnsund, including Orth which we managed to get into this time and go to the recommended Greek restaurant.  We learned that it is very unwise to have a starter in a German restaurant, especially if the food is excellent……  before returning to Burgstaaken to sort out pre-lay-up repairs and maintenance. 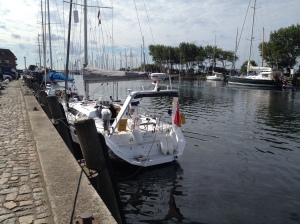 The port of Orth

Some great sunsets up here

Nice people we met on this leg of the journey.

The guy running the Boatyard at Rendsburg. Just seemed so happy with his way of life.

The staff at the BKYC

Horst and Janet who drove us to the Supermarket in Kiel, and gave us many useful tips about Baltic sailing.

Numerous Brit CA members in Bergtiefe who invited us to drinks and BBQs and gave us useful lay-up tips.

2 responses to “The Baltic at last”