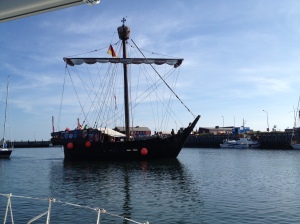 The Vikings are coming

It’s not often that I get positive comments on my fashion sense……. I was wearing a T Shirt which one of our kids gave me for Christmas. The slogan on the front says, “I don’t want to. You can’t make me. I’m retired”  The Marina Harbourmaster in Den Helder saw this and took a picture so she could get one printed for her husband who is retiring from the Dutch Navy.  We got talking.  She and her family have lived in Portsmouth, and know the UK south coast where we live. Her husband is a Naval Traffic Controller in the big signal Tower at the harbour entrance. We were delighted to receive an invitation to go to the tower to meet him, and have a guided tour of the operations centre. It was fascinating to see the harbour and the surrounding area from this high vantage point. Also to see the Radar and AIS displays and discuss the geography of the islands and the Waddenzee area.  They see every vessel movement no matter how small the boat. (Yachtsmen jumping the signal lights beware!)
We also visited the Dutch Naval Museum in Den Helder. I was particularly interested in the WW2 minesweeper which had been stationed in the Pacific, where the crew evaded the Japanese occupying forces by camouflaging the ship with foliage from the islands, and eventually escaped to Australia.  An amazing story.

The weather still didn’t seem settled, so we elected to travel to our next intended stop, Terschelling, in two stages by making a trip across the Waddenzee via the mainland port of Harlingen, rather than by the offshore route on the north side of the islands. The Waddenzee is the shallow area between the Friesian Islands and the Dutch Mainland. There are numerous buoyed channels crossing it, but not all of them have water at every state of the tide, so it needs a little pre-planning. This is the start of the area made famous by the Erskine Childers Novel, The Riddle Of The Sands. (If you don’t know it, check out the film staring Michael York and Jenny Agutter.)

We spent a pleasant couple of nights in Harlingen where we tied up in a basin in the centre of town.  Then set off again up another series of buoyed channels to approach the island of Terschelling from the south. 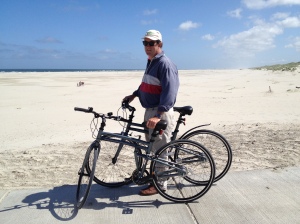 The folding bikes getting an outing

The harbour at West Terschelling was crowded, but not as bad as we had been lead to expect. We got the folding bikes out and explored. The Friesian islands are huge sand dunes stuck out in the North Sea. Terschelling is typical with vast sandy beaches stretching for miles down the North Coast, fringed with pine forests. The harbour being on the protected South side facing the Waddenzee and the mainland. There are channels between the Islands called Zeegats, which give access to the harbours from the North Sea. Some of the islands are uninhabited nature reserves and some, like Terschelling, are set up for tourism.
The next stop on our trip was the mainland port of Lauwersoog. We passed down the North coasts of Terscheling and Ameland, and entered the zeegat between Ameland and Schiermonnikoog, where an 8 mile channel brings you to the outer harbour at Lauwersoog. We spent the night in a fairly exposed box mooring, and then sought a more sheltered berth in the Noordergat marina behind the dyke. There were some very strong winds forecast, and we wanted to be tucked away somewhere safe. Getting to Jachthaven Noordergat from the outer harbour involves a lock with lifting road bridge. We shared the lock with another yacht and a big Coast Guard tug, which was a bit worrying, but he was gentle with the prop-wash, so it all went fine.
The night of the strong winds came, and boy did it blow. (F10)   The boat was pinned hard against the mooring staging and laying over under the windage of the rig. We had to wedge lots of fenders in to prevent any damage. When it all blew through we decided that venturing out into the North Sea wasn’t a good idea for a while until the sea flattened off. So we set off for Groningen by canal
with the intention of stopping the night half way and then carrying on through to Delfzjil on the river Ems where we could get to the island of Borkum by the “backdoor”. That’s when we heard about “the bridge”…….
The last bridge on the Eemskanaal before Delfzjil is the Eelwerderbrug. When we got to the halfway point at Groningen we found out that the bridge was closed due to “an impact with a barge” the previous week. We couldn’t get much more information, although various rumours and time estimates were circulating in the marina. So I called up the Cruising Association Honorary Local Representative (HLR) and asked for help. He very kindly called the Canal Authority and was able to tell us exactly what was happening. It seemed we would have a wait of about 4 days until we could pass the bridge and get through to Delfzijl. Having a “local friend” to call who speaks perfect English is one of the attractions of CA membership.

During this enforced stay I checked over the engine, and found to my dismay that we were losing a significant amount of gearbox oil through the seal on the output shaft. I had suspected a leak earlier and been monitoring it, but it was clear that it wasn’t getting any better. We had a choice to make. Keep going towards Germany in the hope that it wouldn’t get much worse and could be controlled by regular top-ups, or get something done about it now. After some consideration we decided that we shouldn’t really put back out into the North Sea with this kind of problem. Also, a search of repair agents for our make of engine revealed that there was a company in Delfzjil, and then no one else on our route until well into Germany. I made a call and booked us into a shipyard (yes it really was a shipyard where they fixed barges and small ships) where the repair would be carried out. Fortunately, as is usually the case in Holland, everyone put us to shame by speaking perfect English.
After another enforced stay of about 4 days, we left Delfzjil having had front and rear oil seals changed on the gearbox. Not the sort of thing you expect on a new engine…. That evening we took the ebb tide up the river Ems to the island of Borkum. At last we were in Germany !
Borkum was enjoyable. It’s slightly rough and ready and reminded us a bit of Alderney. It had a real Island Community feel to the area around the port. The harbour was host to several wind farm support vessels, there being a large wind farm just off the island. It was good to see that a number of these were operated by British companies.  All through the Friesian islands there are wind farms onshore and offshore. Despite their protected Nature Reserve status, the Dutch and Germans have managed to integrate renewable energy into these environmentally sensitive areas. Perhaps the UK could learn something from this? The world needs renewable energy. Do windmills really look that bad?? One day, when the technology is superseded, presumably they can be removed and there will be no lasting impact. Meanwhile, looking at a windmill seems a small price to pay for clean energy? 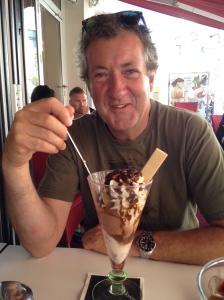 Next stop Norderney. A much more up-market tourist island with overtones of it’s old imperial spa town past. The approach is notoriously shallow, and the Pilot Book contains dire warnings of not trying it in more than F4 on-shore. Also, the sands shift so often, and the buoys are moved accordingly, that you can’t rely on their positions corresponding to the chart.  We turned up, worked the buoys out, and went in. I wouldn’t have fancied it in poor viz’, as their positions were quite different to both our 2015 German chart and our 2015 chart plotter software.  This is one place we regretted not having more time to linger. We stayed a couple of nights, but needed to press on to complete the North Sea part of the trip while the weather was being kind. We had the best Ice Creams ever, and were entertained late into the night by a quayside rock concert playing Stones and Kinks covers. 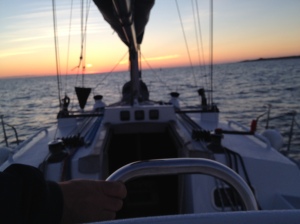 We left Norderney at first light and fumbled our way out of the approach channel. It was a beautiful day, although not really enough wind. We followed the north coasts of the remaining Friesian islands, and then cut across on a northerly track to a point in the North Sea where there is a gap in the shipping separation schemes. We are quite used to crossing the Channel shipping lanes, but this is something else!  There is a huge off-shore ship anchorage where the pilots pick up ships for the Elbe, and an area where the traffic separation schemes meet from various angles. Crossing this lot in a yacht calls for a bit of anticipation, patience and a good engine.  Another one I wouldn’t fancy in poor viz’…… Once through this area of intense shipping, it was a straightforward run to Helgoland.
Helgoland is a rock out in the Elbe approaches. It used to belong to Britain, but we swapped for Zanzibar in the late 1800s. It obviously played it’s part in WW2, as there are numerous bunkers in the cliff. Now it’s a tourist island with seal and bird watching, and more duty free shops than I have ever seen in one place.  The harbour area is a bit chaotic. We were rafted-up 8 deep. But the Germans seem very skilled at doing this without any drama and people come and go from the rafts without any fuss. However, I wouldn’t want to be in one of those raft-ups when the wind really starts blowing……   So we stocked up on cheap booze (would be rude not to), and left the following day for the entrance to the Elbe.
The Elbe estuary is another area that is notorious in the wrong conditions, but we had almost perfect weather for our approach, other than the rather hazy viz’.  The Elbe is a huge river, I mean really huge. We were sluiced up-river by the powerful tide to Cuxhaven where we tied up in a very well appointed, (and surprisingly reasonably priced) Marina. We are now only about 15 miles from the Kiel Canal. So the Baltic beckons……
The wildlife……
On this leg we saw Dolphins twice, and numerous Seals. We had never seen Seals at sea before. These little guys pop their heads out of the water surprisingly far off-shore, and they can’t help looking cute. Of course lots of sea birds too.
Nice people we met…..
The Harbourmaster and her Husband in Den Helder.
The guys at the shipyard who gave me coffee in the workshop and drove me into town.
The Dutch couple on the Canal at Groningen who included us in their canal convoy and ensured we were kept updated on the bridge problem.
The CA Honorary Rep’.
The British couple from Eastbourne delivering their new boat back to the UK from the Baltic, who generously gave us a huge pack of assorted Baltic charts.
They say everyone has a double. We met our friend Phil’s (Bear’s) double.
(See photo of Norwegian Phil).
The young German/ Guatemalan couple who had moved onto their boat a few weeks before, sailed a 160 mile leg to see how they got on, and were now heading for Spain. We wish them all the luck in the world.

3 responses to “The North Sea And German Bight”