Malmo was a good location for me to spend a couple of land-locked weeks while Jane was away. The area around Docken Marina is typical of reclaimed dockland in other cities. It is home to many tech companies, and there is a bit of a “hipster” feel to the area. (Lots of bikes and beards). But it is also pretty dead at night once the after-office drinking crowd have gone home. This is something of a blessing when you are trying to sleep on a boat in the middle of a city….

The broader city is famous for it’s architecture and University, and refreshingly traffic free. Bicycles seem to be the favoured means of transport, and many of the squares are pedestrian areas. It has a vibrant feel to it, and I enjoyed the street cafes, the Technology Museum, and even the “English style pub” I visited. Curiously there are several of these in Malmo. But by the time Jane returned from her 2 weeks in the US, I was happy to welcome her back and move on.

As our previous trips have not included much of Denmark, we decided to spend the second half of our season this year sailing in Danish waters. The plan was to explore some of the islands around the bottom of the Kattegatt and the Lille (Little) Belt. (The sound between the east coast of Jutland and the island of Fyn).

If like me, your knowledge of Danish geography is a little rusty, this map will help explain where we went.

Leaving Malmo we sailed Northwest across the Sound to Vedbaek, and from there back up to the narrows at Helsingor / Helsingborg. This time stopping on the Danish side at Helsingor. A return visit to Gilleleje came next, and then on to Hundested at the head of the Isefjord. Here we cheated a bit, and elected to travel the 50 mile round-trip down to Roskilde, at the end of the fjord, by bus. The two big attractions here are the Viking museum, where you can see the remains of viking ships long-preserved in the local mud, as well as authentic reconstructions in progress, and the Cathedral where the past Kings and Queens of Denmark lie buried in amazingly ornate tombs.

Next stop was the island of Sejero at the south end of the Kattegatt, and then on to Samso, Endelave, and the nature reserve island of Aebelo. Here we saw deer in the forest, ate our dinner on the beach with some friends from the CA and watched the sun go down. These islands are all beautiful, and with the exception of Aebelo, are Danish holiday destinations served by ferries from the mainland. In the case of the larger islands these bring cars and camper vans, and to the smaller islands walkers and cyclists. They have sandy beaches, and during fine summer weather it’s hard to believe you are so far north. It feels more like the Mediterranean. A well kept Danish secret as far as we Brits are concerned.

Unfortunately, our idyllic stay at Aebelo came to an abrupt and uncomfortable end at 4AM, when an unexpected wind shift and increase necessitated a hasty departure from the anchorage! 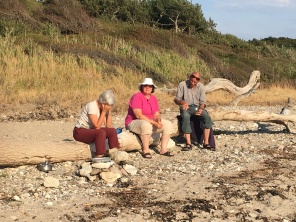 We sailed next to the old town of Middelfart, via a stop at Bogense on the main Island of Fyn. Middelfart is strategically placed on the narrows, where the Kattegatt runs into the Lille Belt. Road and rail bridges connect Fyn to the mainland of Denmark, Jutland, at this point, but all the bridges are sufficiently high for us to pass straight under with our 18.5M air-draft. Here you enter a very sheltered sailing area, where just about anything that floats seems to be out on the water. The area is also famous for very cute small porpoises, of which we saw many over the next few days. 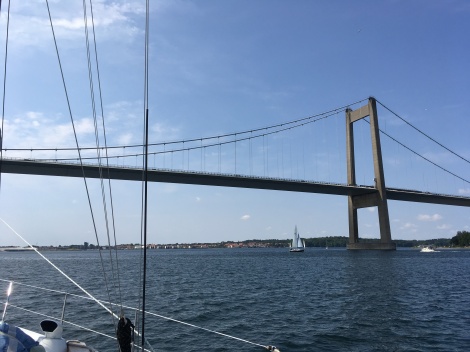 By now the Danish holiday season was in full swing. We’d been spoiled by weeks of hardly meeting another boat earlier in the season. But now we were into crowded harbours, where arrival much after mid-day meant not finding a mooring. We anchored sometimes, and sometimes had to submit to the dodgy raft-ups that inevitably happen at this busy time. All well and good, as long as the weather is quiet. Which fortunately it was, most of the time.

After visiting Bago and Lyo under these conditions we fancied a bit of peace and quiet; We found this is in Faaborg, where the large marina had plenty of space, presumably due to boats being out on the islands. Here we encountered the round Fyn Tall Ships race, which filled the adjacent commercial harbour and created a carnival atmosphere. 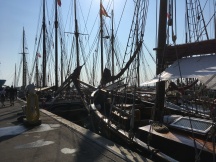 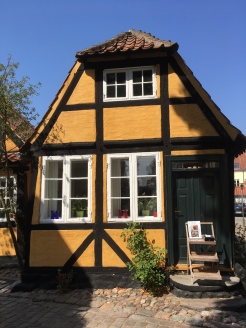 We liked Faaborg, with it’s old town, so much that we stayed longer than anticipated. Finally leaving for Aeroskobing, on the island of Aero, a week later. Aeroskobing is another beautiful old Danish town to explore. The island also has a free bus service which takes you the length of the island. We made full use of this, and also visited the Jazz club on the harbour at Aeroskobing.

By now there were signs of the long-term settled weather pattern starting to break. We sailed to Bagenkop on the southern tip of Langeland, and sat out a couple of days of windy weather, with waves breaking on the harbour wall sending sandy spray over the boat. Then, about a week earlier than we had originally planned, we set off for Fehmarn in Germany.

A word about weather forecasts.  We started sailing in the days when the only source of weather info was the Radio 4 shipping forecast, or a piece of paper posted on the Harbour Master’s office if you happened to stray away from the UK. These days, Navtex, and latterly the internet, leave you spoiled for choice on weather information. We can download GRIB files and create a synoptic chart on a lap top, access national weather service websites and see the shipping forecast for each country as soon as it is issued. We can also access services such as Wind Guru and XC Weather, which provide a location specific wind forecast for the next week. This is very useful for decision making. (Do we go now or wait for a couple of days until the wind is in our favour etc.)  These medium-term forecast predictions are obviously less accurate the further out you look, but even so, they usually get it right.

So while I might feel nostalgic for laying in my sleeping bag listening to “sailing by” playing on Radio 4 before the midnight shipping forecast, the reality is that we’ve never had it so good in terms of weather information.

As I write this we are sitting in Burgtiefe on Fehmarn, about a mile from our winter lay-up destination. Last night the wind was blowing a full-gale with thunder and lightning. It felt very good to be tied up in a nice secure box mooring. We may get out again yet for a final sail, but if not at least we are here now. Meantime, we can start early on the end of season maintenance chores.