As a kick-off to this season I thought I’d start with a post about the logistics and practical challenges of keeping the boat so far from home. It is possible to have a boatyard or yacht service company supply and prepare your boat, so you just step on-board with a few clothes after winter storage and go. Unfortunately we aren’t in that financial league, so we do as much as we can ourselves – here is an outline of how we managed it this year.

The boat spent last winter stored ashore at a yard in Navekvarn in a very pretty archipelago harbour on the east coast of Sweden, but as we intend to return the boat to Fehmarn in north Germany at the end of this season, we needed to leave our car in Fehmarn and get ourselves and all our stuff, spare parts, food, clothes etc. up to the boat.

During the winter, as usual we accumulated boat parts, consumables, charts etc. for the following season. We also stocked up on long-life food, particularly the gluten-free items which Jane needs that are often very expensive in Sweden, and hard to come by in the smaller harbour shops.

A few weeks before departure we sent a large (55kg) tea chest of as much stuff as would fit, by courier direct to the Swedish boatyard. This turned out to be a bit more of a drama than we anticipated, as every courier company seems to have different lists of excluded goods, max weight restrictions etc. But after much googling we managed to find a service that did what we wanted at a reasonable price. The guys at the yard kindly received the box on our behalf, and it was waiting for us when we arrived.

On wet evening at the end of April, with a gale blowing across the North Sea, we set off for Germany via the usual Harwich / Hook of Holland Ferry route. Anticipating a bumpy night and having not been at sea for a while, we took some Stugeron before turning in for the night!  Arriving in Fehmarn the following day we handed over our trusty Berlingo van to the ever-helpful owner of the German yard. The van will now sit in one of his boat sheds until we return.

We checked into a very pleasant hotel in Berg Auf Fehmarn for the night, and caught the train for Copenhagen the following morning. We had a substantial amount of stuff to carry on the train, but it was just about manageable. The train from Fehmarn to Copenhagen is worth a mention because the entire train boards the ferry, locomotive and all for the crossing to Rodby in Denmark. As a rail passenger, you just get off the train on the car deck, leaving your bags on the locked train, go upstairs for a cup of coffee, and return to your carriage when the boat docks. Very civilised.  The next stage of the journey was via bus replacement service, so as Southern Rail customers we felt right at home….. 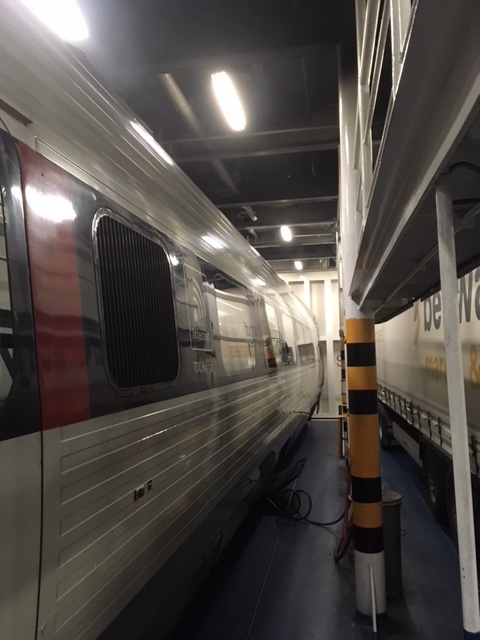 The train on the ferry “car deck”

From Copenhagen we caught the super fast express train to Norkoping in Sweden, and then a final local service to Nykoping, the nearest town to the yard in Navekvarn. A gentleman from the boatyard kindly collected us from the station in his car and drove us the last few Kilometres to the boat. 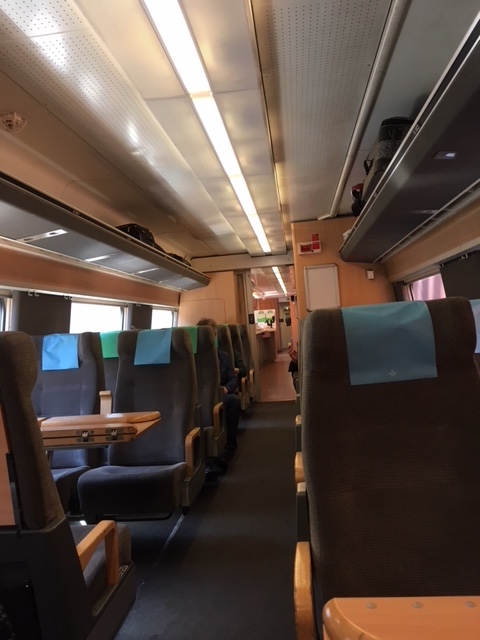 This is how standard class rail travel should be….. Note the buffet car and general comfortable ambience. Southern Rail Please take note!

All our European rail bookings were made in-advance from home. E.tickets and improved rail operator websites have made this so much easier than it was even a few years ago. We have learned a couple of points on our Euro rail journeys over the last few years which are worth passing on: Major long distance express routes can get booked-up quite far in advance, so just turning up at the station hoping to buy a ticket on the day is risky. On some railways you pay extra for a seat reservation, but it is not mandatory. If you don’t reserve a seat on a long journey you will probably have to move or stand at some point when the person who has booked the seat you are occupying gets on. Very annoying if you have a lot of luggage. Having made this mistake once we now always reserve seats.

The Navekvarn boatyard has a guest house next door, it’s a bit basic, with shared facilities and lounge area, but very convenient for preparing the boat for launch, and good value for Sweden.  It took us five days to get the boat un-winterised, the mast up, and launched. Stage 1 complete, now to get sailing!