We hit lucky with the weather on the first leg up the west coast, and made excellent progress.  Our first stop was at the beautiful Ile d Yeu where we tied up next to a couple who were about to leave non-stop for Portugal which put our modest efforts into perspective…… The next day we took a long run up to the north end of Quiberon bay stopping in the convenient, but rather un-interesting, Port Heuligen. We are starting to get used to the boat, but she is bigger than we’ve had before and handles slightly differently as she is quite heavy at the best part of 9 tonnes plus our kit, fuel etc. and needs some respect and a bit of turning space in tight mooring situations. We had several dolphin sightings the following day as we moved on to our next stop at Lorient. Here we passed the old German Submarine pens and remains of various gun emplacements to tie up in the heart of the city in a friendly but rather tired and run-down marina. The signs of economic recession are everywhere in the closed water-side shops and general air of decline. We met some nice people though, including a local English language teacher who asked us to spend an hour talking English with some of his adult pupils at a waterside cafe. This turned into a couple of hours, but was an unexpected and rather charming way to spend the morning, before hitting the supermarket and all the other boat jobs. On a lighter note, I couldn’t help overhearing a phone conversation from the cockpit of the boat next door to a new crew member which seemed to sum up the whole “glamour” of yachting. “So you will be here tomorrow?  Great!   By the way,  the last guys left their kit on the boat, not much room.. Please don’t bring more than one small bag. You don’t need much. I’ve been wearing the same pants since Brest”

From Lorient we sailed in occasional company with more dolphins, to the pretty port of Loctudy, which was set in beautiful countryside and had several creeks and inlets ripe for exploring – we could have happily stayed for a week. But we had work to do. A visit to the local Nanni Diesel dealer who got a bit confused and provided us with the wrong size filter at first, and then back to the boat to give the engine it’s 20 hour first service as the light winds had resulted in more engine hours than we anticipated. From Loctudy we ran up to Sainte Evette which is a strategic stop-off used by many boats waiting for the right weather to tackle the feared Raz de Sein.  This was our first night spent on a buoy mooring on this boat being rocked to sleep, and it brought back fond memories.

We were slightly nervous at hitting the Raz right on Springs (big tides) but in the event it was fine in the prevailing light winds. We timed our arrival off Pointe de Raz for slack water, and experienced only some rather large swells with no broken water. However, the whole place has a kind of brooding malevolence about it and we wouldn’t want to be there in any sort weather. For non-sailors, the Raz de Sein sits off a headland on the west coast of France and the tide rips over a shallow rocky sea bed between the headland and the off-lying Ile de Sein, with inevitable results to the sea state. It’s the place you often see on French tourist shop posters with the sea breaking half way up the side of the lighthouse on a bad day…….

We passed the Raz, toasted the sea gods in red wine, breathed a sigh of relief and headed for Brest and a few days off.   En Route, we caught our first fish during a lazy sail into the huge Brest bay, and were boarded by French Customs, who manoeuvred their ship alarmingly close and 5 armed officers came aboard via a RIB to check us out in minute detail – it was a little intimidating, but thankfully they could find no fault with our paperwork and remained charming throughout.  In Brest we met our friends flying in from the UK to join us on the next leg. 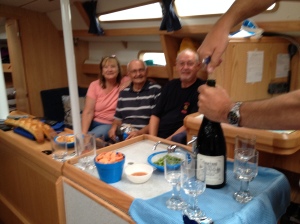