Our route from our Baltic lay-up location to the North Sea, via the Kiel Canal

We’ve decided to head back towards the UK this year; after three seasons in the Baltic, nice as it is, it’s time to bring Grey Wanderer home for some TLC and to decide where to sail next. Travel out to Germany and getting the boat from it’s “mothballed” state to a working vessel was mostly just a repeat of previous years. Burgstaaken was the usual hive of activity, and we caught up with a number of old friends who were also preparing for another season.

Me relaxing from the demands of preparing for another season

The only real item of note was an unexpected problem with our stern gland when the boat was craned-in. I went below to do the usual check for leaks before the crane strops were released. To my surprise, there was a fair bit of water coming in around the prop shaft gland. It usually drips a bit for a while, and after a day or so is fairly dry. But this was more than a few drips. It was squirting in like a kid’s water pistol from several points around the shaft. I had to decide what to do fairly fast, as the crane is like an expensive taxi with the meter running! I opted to have her lifted out again while the gland was repacked. We’ve got a long way to go, and starting off with a known problem didn’t seem sensible. I have no idea why a gland that was fine last year should now leak so much. Perhaps the packing dried out over the winter? Perhaps it was affected by frost?  The ever-helpful Stefan at SE Yacht Services produced some new 8mm packing, and after he had repacked the gland, she was back on the crane the following day. Thanks Stefan for the very quick service!

After the event, I reflected that one of the less desirable aspects of Baltic boating is that you can’t just dry out on a tide to make emergency repairs. You have to hope there is always a crane handy when you need it…….

Eventually, we slipped out of Burgstaaken and headed to Heiligenhaffen, a few miles away in the entrance to Fehmarn Sund, just to see if everything was behaving itself. It was foggy and damp, quite unlike this time last year.

The next day we sailed to the Kiel area, stopping at the excellent Baltic Bay Marina in Laboe. This passage involves circumnavigating the military firing ranges between Fehmarn and Kiel Bucht. Sod’s law dictated that it was “live” on the day we wanted to pass, so we sailed the extra distance round the marker buoys that define the range area. We could see the patrol boat in the distance, but we must have been in the right place, because he didn’t call us or come over to warn us off.

Laboe is a pretty seaside town with a smart promenade area and all the shops you are likely to need. The Marina has an impressive looking technical area, and also looks like a major winter boat storage location. In Laboe we were able to visit the WW2 U Boat, which is now a museum piece, and the memorial dedicated to Sailors of all nations lost at sea. The weather has been very un-settled, with torrential rain and strong winds at times. There haven’t been that many sail-able days, so we’ve found ourselves staying longer in harbours and exploring more on land than we’re used to. 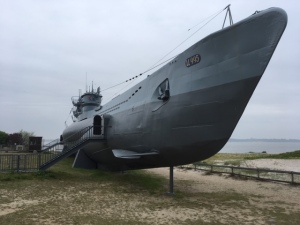 The next stage in our journey was a transit of the Kiel Canal. The small locks at the Kiel end are shut for repairs, so you are locked through with the ships in the big locks whenever there is room. We arrived early in the morning, went ashore at the Tissenkai yacht moorings adjacent to the small locks, and bought a ticket from the machine. We then joined several other boats mooching around expectantly in the waiting area. We waited for about 3 hours until we were admitted to a lock. A bit  frustrating, but you just have to go with it! 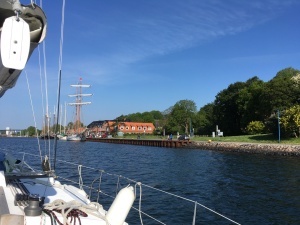 As we have seen before, big ships often have their screw turning slowly when they are stationary alongside in the lock. This sets up a nasty cross-current in the lock chamber as you run up the side of them to the allocated yacht pontoon. The smaller lighter boats are particularly susceptible to being thrown sideways. You have to keep in the middle, keep your nerve, and keep going!  Leaving can also be interesting, as boats towards the rear of the lock are held to the pontoon by the current. Just take your time…..

Squeezing in with the ships and trying to look nonchalant

Eventually we were through, and waving goodbye to the Baltic we settled down to the long haul down the ship canal. It’s about 60 miles from one end to the other, so we elected to break the journey at Rendsburg. Last time we were here we just stopped the night at a boatyard short of the town. This time we went to the Yacht Club in the town itself. The Club is very welcoming, with a good restaurant next to the marina and the town is attractive with an old medieval walled centre. We stayed for two days and can highly recommend as a stop over away from the hurly burly of the canal. 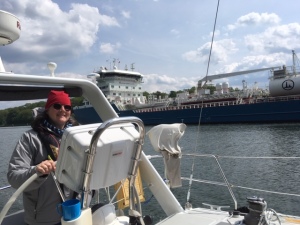 Being overtaken by a ship in the canal

We reached Brunsbuttel at the North Sea end of the canal after another day’s run. We waited a couple of days here, just inside the locks, for reasonable weather conditions in the Elbe to get up to Cuxhaven. The moorings are secure, and the town has all the shops that you are likely to need, but the noise of ships locking out day and night takes some getting used to. Much has been written elsewhere about the Elbe, but suffice to say, it’s a huge, exposed, fast flowing river full of shipping.

Exiting the canal via the “small” locks. Note fairly tight gap between ship and the other boat in there.

It’s a short run from the locks down-river to Cuxhaven. Made even quicker by the mighty ebb tide which adds about 3 knots to your ground speed. Cuxhaven is the last stop before the North Sea. It’s in the mouth of the Elbe estuary, and is one of the great yachting cross-roads. Most boats will stop off here at least for a day, to time their next move up or down river. For those traveling to the Baltic, the prevailing westerly winds usually provide a reasonably smooth ride into the river on the flood tide, and on up to the locks at Brunsbuttel. But boats going the other way often have to wait for favourable wind conditions before venturing out into the estuary on the ebb tide.

(Note for non-sailors. When the wind blows in the opposite direction to the tidal flow, the water gets choppy. The harder the wind, and the stronger the current, the rougher it gets. The Elbe estuary is famous for these conditions, which when extreme, make it impossible to leave the estuary in a yacht.

Home made scones whilst waiting at Brunsbuttel

We waited 5 days at Cuxhaven until a SE’ly wind came up. Then off on the next leg…….

The Yacht Club Marina entrance at Cuxhaven. Our gateway to the North Sea

2 responses to “Back to the North Sea”