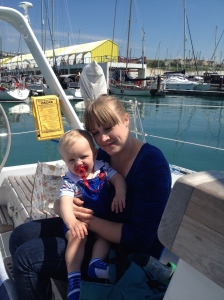 Friends came to see us in Brighton to keep our morale up. 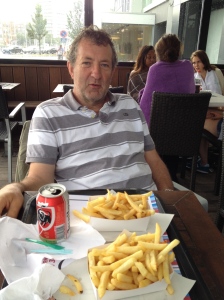 May was busy for us. We had agreed to pack-up our jobs at the end of the month, which involved a certain amount of hand-over and generally extraditing ourselves from two long-term careers. We spent all our spare time either getting jobs completed on the boat, buying supplies, or doing the 101 other things that you have to do when you leave your home for an extended period. Our original plan was to move the boat from Portsmouth to Brighton in early May so we could make final preparations, and maybe have a few day-sails with friends and family before heading off in early June. It didn’t work out like that. The leaking toilet sea-cock episode, referred to in the previous post, cost us two weeks and it was late May before we arrived at Brighton Marina. We enjoyed having friends and family on the boat, and said our good byes at work. Then one morning we headed for Dover. It has to be the shortest voyage on record, because the engine stopped a few boat-lengths out of the berth!  Fortunately it re-started before we hit anything, but it just wasn’t running right. This felt like a huge blow after all our planning and preparation, but looking back, it was a blessing in-disguise for it to happen then. We had suffered some engine problems over the winter, but I thought I had cured them by fixing a leak on the engine fuel supply. The boat had then run perfectly from Portsmouth to Brighton. But obviously there was a bigger underlying problem, and we needed some professional help to solve it. In the previous post I mentioned the engineers at Brighton who sorted us out. We are very grateful that they managed to fit us in at such short-notice, and for their diagnostic skills. Top people!  But by the time they were able to start on our boat, empty the fuel tank, filter the fuel, clean the tank, pressure-test the pipe work etc. we’d lost another 10 days. During this time we lived on-board, read lots of books, and were visited by several friends who kept our morale up. Then one happy day, with everything crossed, we backed off the berth again and this time went straight to Eastbourne.  All seemed OK, so on to Dover the next day.

Dover was a bit of a surprise to us. We’d expected a big busy harbour with a low-tollerence to yachts. But discovered quite the opposite. As long as you stick to the rules it all works very smoothly. Both the harbour Traffic Control and the Marina staff couldn’t have been more welcoming. In fact we liked it so much we stayed a few days and did a bit of tourist stuff.  Fog was forecast on the day planned to leave, and that’s not going to be a good thing in the Dover Straits….. so that meant another day.

Eventually we crossed to Calais. Being used to Channel crossings further west, where its 60 or 70 miles, the Dover Calais crossing seemed ridiculously quick. Calais wasn’t exactly over-run with visiting yachts, possibly because of the press coverage about the immigrant problems at the Port. But we saw nothing, and were gone again in the morning. Our next stop was Dunkirk, where we dug out the folding bikes and cycled out to the British Expeditionary Force Memorial on the edge of town.  We stayed at  the Yacht Club De Mer Nord marina, which was a bit tight for space but very friendly.

Then on to Belgium. There has been a lot of controversy about the Belgian Customs fining UK yachts for having red diesel in their tanks. (Even though we pay full VAT on it for pleasure use in the UK and every Marina sells it). For this reason a lot of UK boats have avoided Belgium over the last few years.  As far as we could tell from forum posts on sailing sites things seemed to have died down, so we risked it and never even saw an official. We decided to head for Oostende, being about half way along the Belgian coast. There was a light off-shore breeze, and we were focusing on keeping in the channels between the sandbanks which are a feature of this coast, when what I can only describe as a mini-swarm of bees decided that as they had been blown out to sea our boat was a good place to make their home. They weren’t at all aggressive, and most of them formed a tight group on the yellow rescue sling next to the helm position. Jane isn’t scared of much, but bees and wasps are her least favourite thing in the world, as she is allergic to their sting. So unfortunately, Jane had a pretty stressful time until we arrived at the Royal Yacht Club Oostende, where she was able to leap from the boat and escape! As compensation we had a great meal in the excellent Yacht Club restaurant. The Club is a great facility with a very helpful Harbourmaster and I slightly DIYish atmosphere. Not quite as posh as the name suggests, but none the worse for that. The next day we took a tram into the town centre, ate chips and mayonnaise and drank beer.

Next stop Holland.  On a slightly robust sailing day we left Oostende and followed the coast past the enormous harbour moles at Zeebruge, across the Dutch border and into the Westerschelde. Our first Dutch port was Breskens. It’s  a neat and tidy small town with a large and efficient marina. From here we can chose to either follow the Dutch coast, or continue north through their inland waterways.

One response to “Brighton to Breskens”